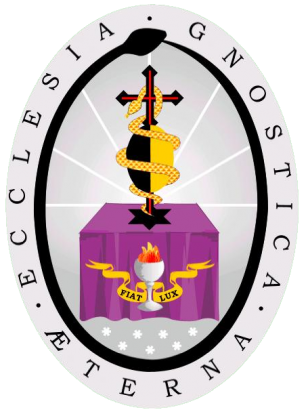 Originating from a dark and hidden place which they remember not
they seem thrown into the World in which they are not at home.
Emerging from the Ur-ground of Life
they await the calling of the Faceless Gods.

The Kosmic Gnostic Pathway of the Ecclesia Gnostica Aeterna leads the initiate back into the Homeland of the Soul from which he has been cast out. We aim to return to a primordial consciousness in which we realize ourselves as an integral part of the sacred eternal cycle of daemonic Life and as mediums for the manifestation of Kosmic All Powers. Thrown into an alien world, the Kosmic Gnostic recognizes the widespread ignorance and fear of a profane Mankind deceived and broken by a corrupt reality. The maternal Urn shattered, humanity inhabits a broken Cosmos of suffering which has its source in a Demiurge with many Masks, the Father-God who is only Once (The hidden God of logo-centric Gnostics would just be a further abstraction and transcendental projection).  He is the Enslaver whose tyranny induces a false perception of reality with catastrophic consequences. The Monad, the God of Laws turns the world into a prison. Originating in the source of the unmoving One, the logo-centric spirit invades Mankind and rules the individual from his seat in the I-consciousness through mechanical ratio and a profane will to power.

Our Gnostic Ecclesia acknowledges the threefold division of Man in body, soul and spirit but for us it is the body and the soul which constitute the primordial polar unity which manifests the reality of the World. The body is the manifestation of the Soul and the Soul is the meaning of the body. The pleromic Reality of the pandaemonic All is revealed when the pathic, receptive Soul of a human mates with the inseminating, enthusing power of the daemonic Kosmos. The phenomenal Kosmos is alive. Not only single organisms have life (Soul) but also the elemental world such as landscapes, climates, planets. They are ensouled because they are able to ‘appear’ and enthuse – and what appears is Soul. The Reality is thus a polarization of enthusing Life and experiencing and receiving Soul. The greater the participation in the faculty of elemental vision of the individual entity (plants/elements, animals, humans), the more deeply the reality of Life is released from the enthusing and inseminating pole and is brought to appearance. In Mankind the faculty of elemental, soul-based vision is most ‘awake’ and the kosmogonic Eros, rooted in the faculty of vision, ignites from the immeasurable plurality of daemonic souls/enthusing images of the All-life. The more the unrestraint human soul abandons herself to the seductive enthusing powers, the deeper and more profound the Realities she birthes.

The spirit is the enemy of this Fullness and like a wedge severs the unity of body and soul turning night consciousness into day consciousness. He reduces, isolates, fixates and manipulates the ceaseless flow of enthusing powers which constitute the biocentric reality of the pleromic Kosmos transforming the sacred rhythmic and polar All of continuous daemonic Becoming into a wasteland of sterile concepts and de-souled things. To ensure our return to the Open Life, our Ecclesia has developed a double pathway: The unblocking and empowerment of the impoverished Soul and the simultaneous transformation of the parasitical spirit into the refined Spirit. We have developed powerful esoteric methods of removing the many dense veils choking the primordial faculties of the Soul and to restore her to her former divine glory.
The logo-centric spirit in its purest form is drawn down from the Monad through sacramental work and transformed through methods of Black Alchemy in our alchemical-sacramental Gnostic laboratory. Rather than allowing the spirit to unfold its negative powers within us or bless our work with its toxic rays, we transform it and make it subservient to the Powers of Soul and Life. Only when spirit is dedicated to Life and Soul it can contribute to creative and truly sacred processes through symbolic thinking or in will and deed resulting from strong Soul-experiences in the World of Powers.

The Kosmic Soul Guide points the way and the Carriers of Essences will hear again the shivering voices of the depths and the forbidden songs which engulf the shores of the unspeakable. In the twilight of the Kosmic resurrection flare up from the hidden chambers of the Soul the riddling images of Life in a never before beheld glory.

The Apostolic Succession (A.S.) is very important to us since its roots do not only link to the times Christ and the Apostles (the oldest historically valid Succession) but stretch further back into pre-historic Pagan times and their mysteries. Many fragments and symbols of a pre-Christian Gnosis are embedded in the specific Mysteries validated and guarded by the Apostolic Succession. Thus the Apostolic Succession connects us to an Age in which Man’s syntony with the daemonic All was at the center of cultic and initiatic activity, transmissions which reach us through the A.S. if properly understood and employed.

The A.S. is also a highly charged reservoir of spiritual energy fed by devotees of the Father and the logocentric Christ through their projections and devotions. From this huge pool of energy we can continuously draw power down for our heretic operations.

Finally we are connected through the A.S. to the Inner Cult of the Logos and to its source, the anti-heart of Life, the One who’s Powers we usurp and transform in our work of Black Alchemy. Only when the spirit is transformed and melted into a productive symbiosis with the daemonic soul every act becomes a monument to Life as the All becomes flesh.

In the Kosmic  sacramental Gnosis Krist becomes a symbolum of the Living All; he is a hermaphroditic Ur-cell in whom we find a great concentration of telesmatic substance which may be dispensed into the world to ignite the sacred Fire in the Blood of the Elect. A god of eternal fertility and self-renewing life Krist is the child in which the Great Mother comes again and who stands in opposition to the Father God of abstract laws and transcendence. Eros-Krist is a God of Love and a God of Death through whose pathway we may receive divinized Life. A God of the Night he is the cradle of powerful revelations and symbols which may swallow gods but gives birth to them anew in different form. He is the God of a Dionysian ekstasis of Death, the rapture of Death which calls to the bridal chamber. Mating with Krist results in the breaking apart of false/profane individuality and in the kosmic resurrection within true pandaemonic Life, the erotic pulse beat of eternity.

Theme by Anders Noren — Up ↑